The new edition of SportBusiness International rankings has again ranked the Russian International Olympic University (RIOU)’s Master of Sport Administration  course as No. 2 in Europe. RIOU’s MSA has kept the second place in this influential ranking for three consecutive years.

SportBusiness International – a London-based authoritative sports business publication – has announced its 2019 Postgraduate Sports Course Rankings. RIOU’s flagship Master of Sport Administration (MSA) course was placed as 2nd in Europe for a third time, and went up from 11th to 10th position in the world, leaving behind such giants as AISTS (Switzerland) and Columbia University (US). RIOU is the youngest university in the SportBusiness global rankings covering 40 postgraduate courses from different countries. 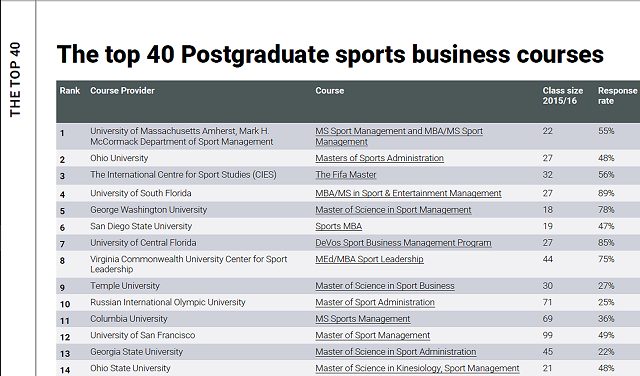 The rankings include universities that launched their sports management programmes at least three years ago. The methodology of ranking is based on surveys of graduates on quality of teaching and future employability. Other key criteria include gender balance, domestic/international student ratio, languages of instruction, internships, and quality of alumni support.

Since 2017, RIOU has been the only Russian university to feature in SportBusiness International’s review of courses. In 2014, RIOU was included into the “Ones to Watch” list as a newly established institution that could not participate in the rankings but already showed a great potential. This year RIOU’s MSA has confirmed its position at the top of the rankings.

SportBusiness International is one of the most highly acclaimed publications dedicated to the business of sports. Its rankings provide the most comprehensive and reliable guide to the best sports management courses in the world. With the fast pace of development in the sports industry and sport business education, the scope and  significance of the rankings keep growing: in the past few years, the number of entries has increased three times.